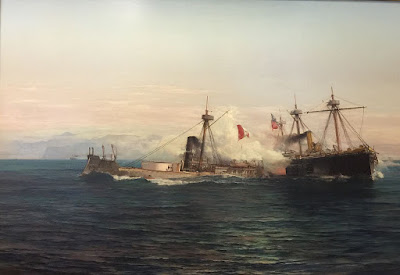 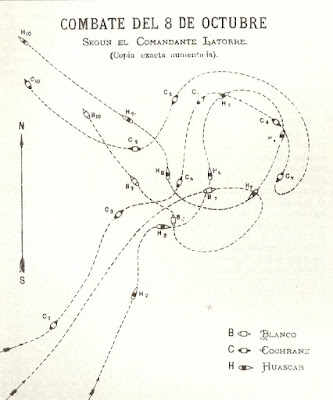 On October 8, 1879, Admiral Miguel Grau's luck ran out when he skirmished with two Chilean flotillas off Punta Angamos. The Huáscar was captured after the heroic admiral was killed, although the Unión escaped.

The Naval Battle of Angamos (October 8, 1879) was an important struggle in the War of the Pacific, where the Peruvian ironclad Huáscar was surrounded and captured by the Chilean Navy. The captain of the ironclad, Peruvian Admiral Miguel Grau, was killed in the combat. After this battle, the Peruvian Navy was unable to prevent the invasion of its territory. The seas were cleared for the invasion of Peru and Bolivia.

After the Naval Battle of Iquique, the Peruvian ironclad Huáscar made several incursions challenging the Chilean naval dominion, attacking ports along its entire coast and capturing transports.

This sole ship was preventing Chile from invading Bolivian and Peruvian territory, and did so successfully for nearly five months. No attempt to disembark troops could be made, because the Huáscar was preventing the entire Chilean Navy from taking control of the sea.

Because Chile's plan was to achieve naval supremacy, prior to invading Bolivian and/or Peruvian territory, the Huáscar had to be eliminated along with Admiral Grau.

Several efforts were made in order to capture or sink Huáscar, but none succeeded. Finally, nearly six months after the naval combat of Iquique, the opportunity came for the Chilean Navy.

Six Chilean ships -- the Blanco Encalada and Cochrane casemate battleships among them -- were directed with the sole purpose of sinking or capturing the Peruvian vessel. An ambush had been set up, carefully planned by dividing the Fleet in two: one near the Bolivian coast and the other part waiting for instructions.

On October 8, 1879, near Punta de Angamos, the first part of the fleet, led by the Cochrane spotted the Huáscar and the corvette Unión. After ordering the Unión to look for a safe port, Admiral Grau prepared his ship for battle.

The ironclad made the first shot at a distance of nearly 2,000 meters. None were capable of damaging the Cochrane. From the same distance Cochrane fired its first discharge of the battle. Its second shot hit Huáscar directly in the bridge, killing Admiral Grau and some of his senior officers. Another shot cut an important part of the helm, leaving the ship without control. Several members of the surviving staff (Elías Aguirre, Melitón Carvajal and Diego Garezón) led the ironclad until the end of the battle.

Nearly two hours after the beginning of combat, when it became clear that the ship would be captured, the remaining crew of the ironclad made the decision to scuttle it rather than surrender it. However, the ship was captured nonetheless, and prevented from sinking.

The capture of the Huáscar brought an end to the sea campaign of the War of the Pacific. From this point forward, the Chilean navy was able to use the Huáscar as one of its own ships.