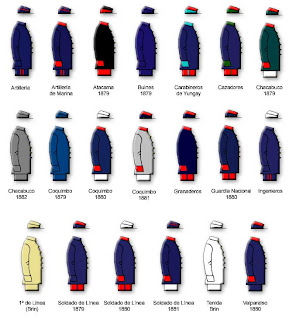 Chile’s military differed from its enemies in a variety of ways. On the most superficial level, Santiago’s troops dressed rather drably, at least when compared to Bolivia’s colorfully clad hosts. A few of Chile’s militia units did design some regalia that rivaled in hue those of La Paz, but the Ministry of War, doubtless anxious to ensure uniformity—always a cardinal military virtue—quickly stifled such originality. Instead, Santiago’s troops, aping the French army’s fashions as well as its tactics, marched into battle wearing blue or red kepis and jackets, red trousers, and sometimes brown puttees or leggings.

Another, and certainly a more significant distinction, was that Chile’s prewar army was composed of volunteers: those who served as private soldiers or noncommissioned officers had enlisted, generally in return for a bonus. The enlisted men did not constitute the elite of the Chilean nation. Indeed, one foreign writer described them as “the very lowest scum of society.” Thus, we should not be surprised if these sunshine soldiers often deserted, taking their bonus and their new uniforms with them.

Unlike the Allies, the Chileans had standardized the regular army’s weapons. The infantry carried Comblain II rifles, and artillerymen used Winchester carbines, while the cavalry’s Regimiento de Cazadores a Caballo dangled Spencer carbines from their saddles. Increasing the size of the army, however, forced some units to use less modern small arms. The newly created Atacama and Concepción battalions used Beaumont rifles, some of which exploded each time the troops used them for target practice; the Regimiento de Granaderos a Caballo employed both types of carbines plus some percussion rifles. Santiago began the war with four Gatling guns as well as forty-four field pieces and mountain guns, including sixteen six- and eight-centimeter cannons purchased from the House of Krupp. Unfortunately, Chilean gunners had little experience deploying these weapons: in two years they had fired their field pieces only once. It does not appear that the infantry had much more experience using their small arms.

While the active army had adequate weaponry, the same could not be said for the national guard. The seven-thousand-man militia—which tumbled from eighteen thousand in 1877—had to make do with 3,868 ancient minié guns and “old French flintlock rifle[s], converted into percussion weapons, which through use and long time in service, are now found in bad state.” Unsurprisingly, the guard’s artillery, or cavalry guard units, also had to make do with outdated equipment.

A few factors distinguished Pinto’s army from that of the Allies. Thanks to Diego Portales, who had purged the army officer corps, the nation had managed to avert some of the more grievous sequela of unbridled militarism. Chile, however, was not immune to internal unrest: in 1851 and 1859 the army had to subdue rebellions. The Moneda sometimes called upon the military—but more so the national guard—to guarantee the “correct,” not necessarily honest, outcome of an election. Officers who demonstrated a lack of enthusiasm for this task or who vocally espoused a different political ideology than the government’s favorites sometimes had to resign their commissions.

In short, although flawed, the Chilean system nonetheless differed from that of Bolivia, where the chain of command was supplanted by cronyism, where “the intimate friends of the commander take turns sharing the command with him.” These facts do not mean that some Chilean officers did not call upon their santos en la corte to influence promotions, to arrange a coveted assignment, or to obtain protection from official retribution. Indeed, precisely because some officers served as government bureaucrats or sat in the legislature as elected representatives their acquaintance with politicians gave them some clout. But Chilean army officers also realized that the congress not only authorized the military’s budget but also set limits on its size, that if the minister of war was a professional officer he served at the pleasure of a civilian president and legislature, and that a promotion law required that officers spend a certain number of years in grade in order to ascend in the army’s hierarchy. Compare this requirement to Daza, who in thirteen years rose from the rank of private to lieutenant colonel.

Additionally, Chile’s officer corps, unlike that of the Allies, was professionally educated. True, a few of the army’s most senior officers, such as Gens. Justo Arteaga and Manuel Baquedano, received their commissions directly, but they were in a minority. Most of Chile’s officers entered the army only after completing a course of study in the Escuela Militar. Founded by Chile’s first national leader, Bernardo O’Higgins, the school at times seemed more like a refuge for juvenile delinquents than an institute for aspiring officers. A cadet riot, for example, forced the authorities to close the school in 1876, but it reopened in late 1878 with the expectation that it would graduate its fi rst class in five years.

Even attending the Escuela Militar or unit-level postgraduate seminars did not prepare Chile’s officers for modern war. The lessons of the later years of the American Civil War and the Franco-Prussian conflict—that rapid-fire rifles and breech-loading artillery devastated massed troop formations—did not seem to influence Chile’s infantry, which continued to use the tactics outlined in a translated edition of a 1862 French military text. Unfortunately, as Jay Luvaas noted, “The infantry regulations of 1862, which had been described as a ‘faithful reproduction of the regulations of 1831’ [varied] little in spirit from the Ordinance of 1791.” Thus Chile would go to war in 1879 using the tactics of the Napoleonic era. As Emilio Sotomayor observed, “A soldier, especially the Chilean, because of his nature has to be watched and overseen constantly by his officers. Otherwise—as practical experience has shown us on many occasions—the soldier obeys the tendency to disperse and to fight alone.” This habit might have developed as a consequence of a situation unique to Chile: for decades the Araucanian Indians were Santiago’s major enemy. Whatever their deficiencies, Chile’s army acquired more military skills fighting the Indians than the Bolivian army did from “promoting or suffocating revolutions or mutinies.” Ironically, the foot soldiers seemed no more backward than Chile’s cavalry, which still followed some early-nineteenth-century Spanish regulations. The infantry employed tactics modeled on those of the Spanish for muzzle-loading weapons, not techniques adapted to the use of modern fi rearms. The artillery perforce demanded a higher level of education: in 1874 Gen. Luis Arteaga wrote a manual to teach the army’s gunners how to master their newly acquired Krupp artillery and Gatling guns.

Only two commanders, Ricardo Santa Cruz of the Zapadores and Domingo Toro Herrera of the Chacabuco, absorbed the lessons, which they later demonstrated during maneuvers. Their efforts, while not converting other commanders, convinced a few to adopt the maneuver of having their companies advance in skirmish lines; regrettably, the rest of the army, an American naval officer observed, did not embrace the new tactics, devoting its efforts to “mechanical precision and too little to skirmishing. Open-order fighting did not seem to form part of the system of tactics.”

In addition to the gaps in their education, Chile’s officers often lacked practical experience. The army’s more senior commanders did not know how to maneuver large units. Col. Marco Arriagada complained that most officers did not possess the knowledge to train the infantry and cavalry how to use their new rifles. Even when they acquired new Krupp field pieces, Chile’s gunners did not understand their value because they had fired them but once in past two years.

In sum, Chile’s army seemed ready to fight the war against Peru and Bolivia in 1879 using the same tactics it had employed when it had battled against the armies of the Peruvian-Bolivian Confederation in 1836. Happily for the Moneda, its enemies’ military proved equally rooted in the past: just as the Bolivians still resorted to Napoleonic squares to repel cavalry charges, the Peruvians continued to follow Spain’s only slightly more modern 1821 military regulations, which, many officers sadly acknowledged, seemed appropriate only for a “distant epoch.”

Posted by Mitch Williamson at 5:33 PM