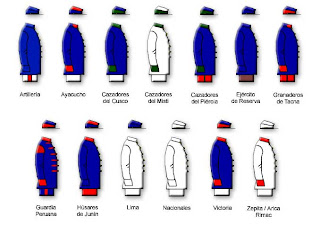 The declaration of a state of belligerence caught the Peruvian and Chilean armies in various stages of military unpreparedness. In Peru’s case, this condition partially resulted from bad luck: in 1875 the Lima government embarked on a project to reorganize the army using its noncommissioned officers recently graduated from the newly created Escuela de Clases as the core of the new formations. Economic as well as domestic political considerations, however, delayed the proposal’s completion. Thus, once the conflict erupted, Mariano Prado’s government had to abandon its efforts at restructuring and revert to the army’s old table of organization—seven infantry battalions, three cavalry squadrons, and two artillery regiments—to fight the war.

As part of its abortive reform proposal, between 1869 and 1878 Lima sent two missions abroad to acquire small arms. The first purchased two thousand Belgian Comblain II rifles. When Peru sought to buy more of these weapons three years later, it learned that the factory could not fill its order. (Deliveries to Brazil and Chile absorbed most of the plant’s capacity.) The second mission compromised, acquiring five thousand of the less effective French Chassepots, which it modified to accept the same cartridge as the Comblain. This weapon became known as El Peruano, or as the Castañón, in honor of Col. Emilio Castañón, who led the delegation.

The arrival of these new rifles, however, still could not satisfy completely the needs of Peru’s newly expanded army. Consequently, the government had to equip its troops with the obsolescent weapons, generally of different calibers and national origin, that clogged Lima’s arsenals. The Pichincha, Zepita, and Ayacucho battalions carried American-made Sniders, while the Dos de Mayo and Cazadores de Cuzco battalions toted Chassepots. The administration later claimed that by September 1879 it had standardized its weapon systems to the point that at least each division used the same firearms. Yet, on the eve of the Battle of Tacna in May 1880, a provincial prefect informed President Nicolás Piérola that the army was equipped with 5,873 rifles and carbines produced by twelve different manufacturers. As Segundo Leiva of the Second Army of the South noted, relying on such a heterogeneous mélange of rifles caused enormous logistical problems. It proved so difficult to provide ammunition that in some units troops had weapons but no bullets.2 Predictably, the government fobbed off its most out-of-date equipment, the Austrian or Prussian minié guns, on the various guardia nacional units; others carried the old Peabody.

Peru’s artillery park consisted of four eight-centimeter Krupp M/67 guns, twelve six-centimeter Krupp M/73 mountain guns, four Gatling guns, as well as some very heavy and very obsolete bronze cannons. During the war Peru purchased additional small arms, ammunition, as well as forty to fifty Gatling guns plus artillery. Local foundries, moreover, manufactured over 650,000 cartridges for the Chassepots, Castañóns, and 688,000 minié balls. These same factories also produced sixty artillery pieces constructed of fused railroad tracks that they encased in bronze and reinforced with iron rings. Called the Grieve cannon to honor its designer, it fired the same shells made for the Krupp mountain gun and had a range of five thousand yards.

Of all its combat arms, Peru’s cavalry seemed the most ill equipped. Although all mounted units were supposed to use Winchester carbines, they did not. Col. Manuel Zamudio reported, for example, that one of the Lanceros de Torata’s two squadrons, clad in body armor, carried lances as well as sabers; the other received Henry carbines that often malfunctioned because it proved difficult to extract spent cartridges.4 Another curious fact distinguished Lima’s mounted units: while Quechua- and Aymara- speaking Indians constituted the bulk of the infantry, and indeed the country’s population, the authorities prohibited them from serving in the cavalry in the belief that Indians did not know how to ride horses. This honor fell only to blacks and mestizos, who apparently had a genetic predisposition to serve in the cavalry as well as the artillery.

The quality of many of Peru’s officers remained doubtful. Although Lima opened its first military academy in 1823, the school, as well as its successors, operated only sporadically. The most recent reincarnation, the Colegio Militar, had only begun to function in 1875, and it did not graduate its first class until 1877. Consequently, most of those who received their commission directly did so by choosing the winning side of one of Peru’s numerous revolutions. Not surprisingly, the results of this system dismayed the nation. The officers’ performance during the war, particularly those at the company grade level, was so wretched that it had been, according to one British officer, the cause of the army’s defeat. Indeed, the Peruvian intellectual Ricardo Palma said of the officer corps that “for every ten punctilious and worthy officers, you have ninety rogues, for whom duty and motherland are empty words. To form an army you will have to shoot at least half the military.” Curiously, scores of officers from Uruguay and Argentina volunteered to serve under Peruvian colors. One of these was future Argentine president Roque Saenz Pena, who managed to survive the Battle of Arica and return to Buenos Aires to fight in the only marginally less bloody battles of Argentine politics.

Posted by Mitch Williamson at 2:39 PM