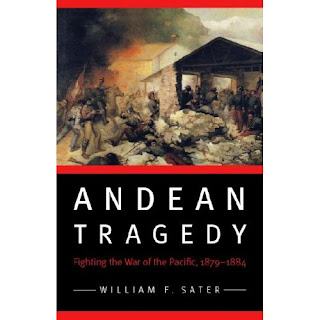 "A fine example of the new vision of battle history as the author discusses arms, strategies, and tactics, as well as descriptions of encounters and the conduct of soldiers. . . . This is a well-written, well-researched work on a crucial event in the history of the west coast of South America and highly recommended to those interested in this region as well as to military history buffs."-Jerry W. Cooney, The Americas (Jerry W. Cooney The Americas )

Product Description
The year 1879 marked the beginning of one of the longest, bloodiest conflicts of nineteenth-century Latin America. The War of the Pacific pitted Peru and Bolivia against Chile in a struggle initiated over a festering border dispute. The conflict saw Chile’s and Peru’s armored warships vying for control of sea lanes and included one of the first examples of the use of naval torpedoes. On land, large armies using the most modern weapons—breech-loading rifles, Gatling guns, and steel-barreled artillery—clashed in battles that left thousands of men dead on the battlefields. Eventually, the warring parties revamped their respective military establishments, creating much needed, civilian-supported supply, transportation, and medical units. Chile ultimately prevailed. Bolivia lost its seacoast along with valuable nitrate and copper deposits to Chile, and Peru was forced to cede mineral rich Tarapaca and the province of Arica to the victor.
Employing the primary and secondary sources of the countries involved, William F. Sater offers the definitive analysis of the conflict's naval and military campaigns. Andean Tragedy not only places the war in a crucial international context, but also explains why this devastating conflict resulted in a Chilean victory.

There is no question that Professor Sater is the foremost authority on the War of the Pacific in the English language and probably in any language. For many years now, he has meticulously and profoundly researched into archives, published works, memoirs, folkloric sources, songs and poetry without leaving a stone unturned. This is his third book and presumably the final work on the subject: the culmination of decades work and study of his favorite subject. His facts are unquestionable even though some of his description of the battles may, at times, conflict with eyewitness narratives or popular sources. His description of the shortcomings in logistics and sanitary services go deeper than any other description of the war. Neither does the author shy away from the horrors of war which many Chilean and Peruvian historians tend to minimize.

Having recognized his effort in the investigations and his fine ability to put the facts together in good and easily understood order, there are plenty of opportunities to disagree with some of his conclusions. Many Chilean historians will find fault with his harsh judgment of Admiral Williams and Captain Simpson, and it must be admitted that he carries them a bit too far. Taking sides with Chilean Historian Francisco Encina, the author treats General Baquedano with equal ferocity. He believes that the General caused unnecessary loss of life at Tacna and later at Chorillos. He accepts the fact that battles of the XIX Century were unusually bloody. Frontal attacks, even if done in echelons, were brutal such as Picket's charge at Gettysburg and Pancho Villa's Army at Zelaya. In reference to Gettysburg there is a striking similarity with movements at Tacna, of course in a much more limited scale, but Baquedano's wise use of his reserves, unlike Lee, gave the attackers the victory. The alternative plan at Chorrillos or San Juan was too complicated, it extended the lines of march, it deprived the army from naval fire support and it did not pursue the ultimate goal of an army: to destroy the opposing force.

In summary, an excellent book: well researched and well organized that constitutes the best one volume account of this tragic war.

Posted by Mitch Williamson at 9:36 AM