WAR OF THE PACIFIC 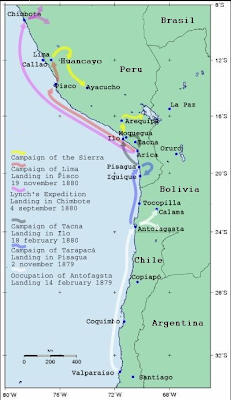 From 1874 to 1879, the South American nation of Chile experienced a depression caused by falling copper and wheat prices, a dropping off of exports, and rising unemployment. The only bright spot in the economy was the expanding nitrate business, but its mining eventually caused war between Chile and its neighbors, Peru and Bolivia. Nitrates were mined in the Atacama Desert along the Chile-Bolivia border. Most of the work was done by Anglo-Chilean companies, which operated in the Bolivian province of Antofagasta and the Peruvian province of Tarapaca. An 1866 treaty between Bolivia and Chile set their border at the 24th parallel, with both countries able to mine nitrates between the 23rd and 25th parallels; tax revenue collected by either country along the frontier would be split with the other country. This taxation arrangement was altered in 1874 when Chile agreed to give up its share of Bolivian tax revenue in return for a promise that taxes on Chilean profits in Bolivia would not be raised for 25 years.

Though Chile had no border with Peru, aggressive Chilean miners pushed into the Peruvian desert to mine nitrates. By 1875, some 10,000 people were employed in mining and subsidiary operations in the Peruvian Tarapaca desert region. Peru had thus far said little about the Anglo-Chilean operations in its province, but in 1875 a faltering economy forced the Peruvian government to nationalize the nitrate companies. The Peruvian government paid for the companies with government bonds paying 8 percent, payable in two years. When the bonds came due, the Peruvians were unable to honor their financial commitments and the bonds’ value plummeted. The Anglo-Chilean companies were able to absorb the loss of the Peruvian assets, but 151 when the Bolivians decided in 1878 to raise taxes on the Chileans along the frontier in violation of the 1876 agreement, the loss of profits was too much to take. Chile refused to pay the higher taxes even when Bolivia threatened to nationalize the operations as the Peruvians had done. According to the 1876 agreement, an arbitrator should have been called in to handle the dispute, but Bolivia refused. The Bolivian government felt secure in its ability to back up its threats because of an 1874 secret mutual-defense treaty with Peru, but the Bolivians failed to consult the Peruvians in advance. In February 1879, Bolivia nationalized the mining companies, and Chilean troops went into action. On 14 February, they occupied the port of Antofagasta against no opposition; soon they were in control of the entire province. Not wanting to get involved in the fighting, Peru offered to mediate a peace settlement. Chile then learned of the secret treaty and, accusing the Peruvians of duplicity, declared war on them on 5 April 1879.

The combined Bolivian and Peruvian effort appeared daunting, especially since they had a combined population twice that of Chile, and Peru had a fairly good navy. However, Chile had a stronger and more stable central government, a more motivated population, a well-trained army, and a navy armed with two modern ironclads. Also, the main theater of operations was handier to Chile; the Bolivians had to cross the Andes, and the Peruvians had to cross the desert. All three countries were in economic trouble, but Chile was in the best financial shape and had the assistance of the British because the mining operations were mainly theirs. Both Bolivia and Peru had defaulted on British loans and angered the British by nationalizing the companies, so they had no qualms about supporting Chile.

The key battle of the war took place at sea on 8 October 1879, when the Chilean ironclads captured a Peruvian commerce raider, the Huascar, that had been hurting their trade and logistical operations. With control of the sea, Chile could supply its troops more efficiently, and the army was soon marching through Bolivian territory into Peru. Bolivia withdrew from the conflict in mid-1880 when Chilean troops occupied large parts of Peru. After a difficult battle, the Chileans captured the capital city of Lima in January 1881, effectively winning the war. Peruvians continued to fight a guerrilla war for two years, but on 20 October 1883 they gave up and signed the Treaty of Ancon. The treaty gave Chile the province of Tarapaca forever and two other provinces for 10 years, after which a referendum was to be held to determine their nationality. The referendum never took place, but in 1929 the two countries agreed to return the province of Tacna to Peru, while Chile kept the province of Arica.

The Bolivians signed an armistice with Chile in April 1884, in which they ceded the province of Antofagasta to Chile, but cession was not official until 1904, when a treaty was finally signed. That treaty obliged the Chileans to pay an indemnity and build a railroad from the Bolivian capital of La Paz to the coast of Arica. The railroad was completed in 1913.

With their army already mobilized, the Chilean government decided to use it to deal with the Araucanian Indians, a tribe that had been fighting for their land since colonial times. Hopelessly outnumbered and outsupplied, after two years the Indians were forced to sign a treaty in 1883 that placed them on reservations, though they were allowed to maintain tribal government and laws. Chile consolidated the rugged territory that had been the Araucanian homeland. With Peru bankrupt and Bolivia isolated, Chile became the strongest nation on South America’s west coast. Control of the area’s copper and nitrate meant an improving income, but close ties to Britain kept them from enjoying it totally. Chile decided to honor the Peruvian bonds issued when the Tarapaca mines were nationalized, and British speculators had been buying them up ever since Peru could not fulfill them. Thus, the British were able to control 70 percent of the nitrate production by 1890, as well as profit from their own construction of banks, railroads, and subsidiary businesses. Longstanding ties between Britain and the Chilean upper class made the British acquisition smoother, and some Chileans were able to profit from investments in British concerns.