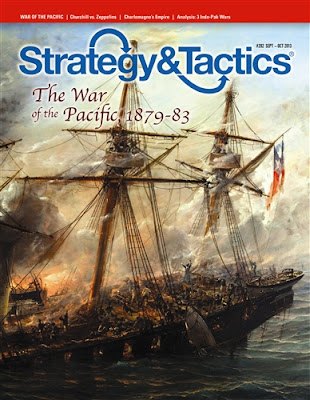 Contrary to my expectation, the game doesn’t cover the whole period of the war. The game covers the last 2 years of the war. Antfangusta is already controlled by Chile at the start.

Anyway, Chile has initiative throughout the game. Their targets are roughly divided into 3 groups, Iquique area, and its adjacent mountainous area including La Paz, and Lima area.

Roughly speaking, Chile can win the game if he conquers two of these three areas.

So, I think that Iquique looks appropriate first target. In this war, the map is really long in North to South direction. And land area is tough. In this game, there’s no plain hex at all. The mildest terrain is rough and it has movement cost of 2 and +1 drm for the defender. Though invasion by land is not impossible, it doesn’t look a good idea.

So, naval transfer has higher possibility in this game. But, Peru has smaller but higher quality Navy at the start. So, the control of ocean is contested. Thus, naval transfer is possible but Chile must take care of Peruvian intercept. I’ll talk about this topic later again.

Another big factor is Bolivia. Though Bolivia is main combat zone, Bolivia is weaker country. And Bolivia will withdraw when Chile get 7 VPs or control area around La Paz. Since La Paz area is defended by Bolivia, the latter case is not a big problem. After the fall of La Paz, there will be no important defending area for Bolivia.

But, if Chile can get 7VPs from other area, this will be a disaster for allied force. It will result in fall of La Paz area and gives Chile sudden death victory.

But, Iquique area is not enough for 7 VPs. So, Chile must find another VP area over Iquique. Amphibious invasion to Lima, or land invasion to Arica. This is a crucial part of the strategy in this game. So, this is a grand design game for Chile. And this design must be strongly related to outcome of the naval battles.

Naval combat
AS described above, naval combat assumes an important role in this game. But, naval combat system is not very detailed. It still has a good amount of historical atmosphere.

Naval units are moved by stacks. Sea hexes are grouped into several sea zones. In this game, movement must be plotted one turn earlier by placing a marker of target zone in secret. Then, it must be moved to the plotted zone by tracing a path of hexes. So, there is a time rag between plotting and execution. The opponent can intercept the moving stack and check by dr. If succeeded, the combat takes place.

Probably, the first Chilean target is Iquique and it is highly possible that Peruvian fleet is waiting around this area. So, the first military action might be a naval combat off Iquique.

In case of being intercepted, Chilean fleet which might have advantage of quantity can match the same number of ships against the intercepting fleet and then continue movement with the excess ships. That means with appropriate careful plot enables Chile to conduct amphibious attack on Iquique area without serious disaster.

I think the first turn is okay as above. But, in most cases, the Chilean damage might be higher in naval combat. That means there’s a risk for Chile he will lose advantage of quantity in the middle of the game. So, Chile must carefully consider the repairment of damaged ship before they really sunk. Or, he can bull the amphibious invasion with increasing risk. Or, he gives up naval actions and tries another hard way along rough terrain.

A naval combat procedure is really simple. Check initiative by fastest ships. And a fleet with initiative fires first. Then, survived opponent fires back. Only one round per turn and they all cannot move further during the turn. Since Chile is the first player of the turn, intercepting Peruvian fleet will lose a chance of her own movement. But, this is not a big problem, since her main role is interception.

To fire, the player decides firing ship and its target, and roll 1d modified with target’s armor. If the result is equal or lower than firing ship’s fire value, it will get a hit. Usually armored ships have 2 steps. So usually, one round combat is not enough to eliminate a fleet. Damaged ships can be repaired in docks. For Chileans it is worth of considering since they have an advantage of quantity. On the other hand, it is hard for Peruvians to repair the damaged ships since they usually need all available ships in its front line. Once sunk, there’s no chance of rebuilding. And there's no reinforcement of newly built ships in this game. Due to this situation, though Peruvian navy is stronger, it tends to be ground by waves of Chilean attack. But, Chilean also has time limit of 12 turns, so it is difficult to judge this erosion strategy is really useful or not.

As described above, tough terrain is a key of this war. In addition, there’s no promised movement allowance in this game. Every time a stack starts movement, the player rolls 2d and picks the higher roll as its movement allowance. If you roll a pair of one, you cannot move at all since the mildest terrain is rough of 2 mps. In mountain area, since it costs 4 mps, a stack often cannot move at all. Instead, a stack can move more than once in one turn. But, when rolling a double, that stack must lose a step. So, theoretically it is possible to go over Andean mountains in one turn. But, usually the stack will be dissolved before arriving. I feel the good 19th century’s atmosphere around these rules.

Combat procedure is similar to the naval ones. Combat is limited to only one round, and each force fires each other. If a unit rolls a 6, it will get one hit on the enemy stack.

Terrain modifier is used by defender and applied all units. Since even the mildest terrain, rough can give +1 modifier, the defender is usually fairly favored. In case of forts, defender can get +3. So, the attacker must expect heavy losses against them. Most of Chilean and Peruvian units have 2 steps. So, it is difficult to eliminate the opponent in one combat. Very often, each side reinforces the surviving force and combat continues for several player turns. In this situation, Chilean who usually has longer supply line will have a problem. So, Chilean would like to put big force as possible as he can at once. But, as described before, this is not an easy job considering the control of sea and limited number of vessels.

Though this is not specifically land combat topic, supply is critical in this game.

In this game, reinforcement come to the available box and not placed on the map automatically. Additionally, you can sacrifice supply instead of unit for movement attrition, and supply can give additional dr in combat.

So, supply is very useful and in other words without supply everything cannot go smoothly.

For Peruvian who basically acts inside his territory, supply is not a serious problem. But, for Chilean who must fight front line inside enemy territory, it is an important problem to supply the acting units continuously. It needs the same procedure to transport supply as the military units. This problem will remind many gamers North African game of WW2. And privately, it reminds me of "Chaco war" on Command magazine, another Latin-American war. And in this case, sea transport has time lag and problem of sea control.

For gamers accustomed with Blitzkrieg games, this game looks slow-going and possibly boring. But, in my honest opinion, this is not a flaw of the game. The reason why this game is alike is that this is a real nature of the war of 19th century.

With long battlefield, problem of sea control, and problem of supply, this game is still very playable and not difficult. I think this is really a good design.

Speaking about other Mr. Romero’s design, I really like “Guera a muerte”, too.

“Triple alliance war” and “Hongrie” were a little bit disappointing. So, this game is my second favorite Romero’s game.

I would like to try “Partizan” if I have time soon.

Currently the definitive uniform guide for the three warring armies (UNIFORMES DE LA GUERRA DEL PACIFICO 1879 – 1884). The land and sea battles that were fought were all quite small, and could easily be re-created using the TABLE TOP BATTLES rules. Although there are no figure ranges available for the Bolivians, Chileans, and Peruvians, the uniforms are very similar to the French, German, and US uniforms of the period, and could be reproduced with a reasonable degree of accuracy using paint ‘conversions’.
Posted by Mitch Williamson at 11:13 PM