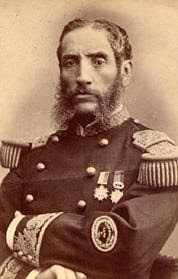 CACERES, Andrés Avelino, Peruvian soldier, born in Huanta, 12 April, 1831. He was a law student at the University of Lima in 1852, when Castilla headed a revolt to abolish slavery in Perú, and joined the revolutionary troops as a second lieutenant. He distinguished himself in the attack upon Arequipa, a place very well fortified, and defended by Vivanco, and General Castilla promoted him to the rank of captain and appointed him military attaché to the Peruvian legation at Paris, where he remained from 1857 till 1860.

On his return to Perú in the latter year he defended the government of Perú in several revolutions, and accompanied Prado at Callao during the attack against that place by the Spanish fleet in 1866. Then Cáceres won the rank of colonel, and was given command of the Zepita regiment, at the head of which he fought against Pierola from 1876 till 1878. During the war with Chile he was prominent, especially at the battle of Dolores, 2 November, 1879, when he successfully resisted the Chilean troops and captured some of their guns.

At the battle of Tacna, won by the Chileans, 26 May, 1880, he commanded a brigade and fought well, after which he offered his services to the dictator Pierola, who gave him command of a division camped near Lima, which was attacked and defeated by the Chileans, 14 January, 1881.

When the Chilean army occupied Lima, Cáceres and Pierola retreated with the rest of their forces to Arequipa, the former being appointed brigadier-general, and authorized by congress to continue the hostilities against the Chileans as well as against the Peruvian General Iglesias, who had established a government of his own at Cajamarca.

He made several unsuccessful attacks upon the Chilean troops, and, after much suffering in a three months' march through the Sierras, could not carry out the orders of congress to destroy Iglesias' government, for he was defeated by a Chilean division under Gorostiaga near Huamacucho, 14 November, 1881. Cáceres then went to the interior, raised a revolution against Iglesias, put himself at the head of a considerable force, and was again defeated near Lima.

But he persistently worked to depose Iglesias, collected more troops, routed those of the government, and finally entered the capital in March, 1885, and at once directed the election of a special board to govern until a new congress and president were chosen. He was elected president on 3 December, 1885, and his inauguration took place on 28 July, 1886.

Posted by Mitch Williamson at 3:06 PM