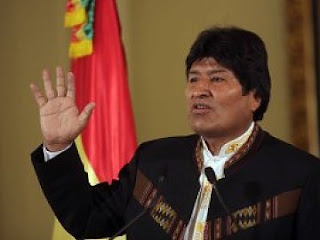 LA PAZ – President Evo Morales confirmed on Monday that Bolivia’s drive to regain at least a portion of the Pacific coastline it lost in a 19th-century war could be harmed by Peru’s litigation with Chile over those nations’ maritime boundary.

The Peruvian claim “would only prejudice one of the alternatives” for Bolivia to obtain a sovereign outlet to the ocean, Morales said during his country’s annual Day of the Sea observance.

“I wouldn’t want to think that this lawsuit that’s being presented before the International Court in The Hague about the maritime boundary between Peru and Chile would be to affect and set back one of the possible solutions to our historic request which is sovereign access to the sea,” he added.

Bolivia on Monday commemorated the 130 anniversary of the death of Eduardo Abaroa, one of the heroes of the country’s defense when it was invaded by Chilean troops in 1879 during the War of the Pacific.

The war cost Bolivia 120,000 square kilometers (a little over 46,000 square miles) of territory and the 400 kilometers (250 miles) of coastline it had on the Pacific before the war, in which Peru was La Paz’s ally and also suffered territorial losses to the victorious Chileans.

Morales insisted, alluding to the Peruvians, that “only they know what this lawsuit is due to.”

He added that, above and beyond the “internal and external agents” who want to harm Bolivia’s maritime aspirations, there are also “international powers” who are trying to create conflicts in the region, but he did not specify to which countries he was referring.

Morales emphasized that he and his Chilean counterpart, Michelle Bachelet, had included the discussion about Bolivian ocean access on the 13-point agenda that is the basis for bilateral talks that began in 2006.

“Sooner or later we will return to the Pacific Ocean,” said Morales, noting that in those discussions there had already been progress made on solving the controversy over water in the Silala region of the southern Bolivian highland province of Potosi.

The waters there, considered by Bolivia to be a source to which it has the rights, benefit northern Chile, which – in contrast – considers it to be an international river.

According to the Bolivian government, Santiago accepted an agreement to economically compensate Bolivia for half the consumption of that water.

La Paz and Santiago have not had diplomatic relations since 1978, after the failure of negotiations that would have allowed the landlocked Andean nation to regain access to the Pacific Ocean, a goal that has become an insistent demand in international forums.

But the administrations of Morales and Bachelet have agreed to an agenda which includes dialogue on Bolivia’s demand for access to the sea, and despite the lack of movement on that issue, the two presidents maintain cordial ties.

The topic of Bolivia’s getting back a stretch, even a short one, of coastline is a sore one in Chile, where virtually all politicians and the great majority of citizens consider the matter long closed.

Bolivia’s repeated attempts to persuade Chile to return the coastal territory caused the countries to break off diplomatic ties in 1962, with a brief resumption between 1975 and 1978, when both nations were ruled by military regimes. EFE
Posted by Mitch Williamson at 6:08 PM