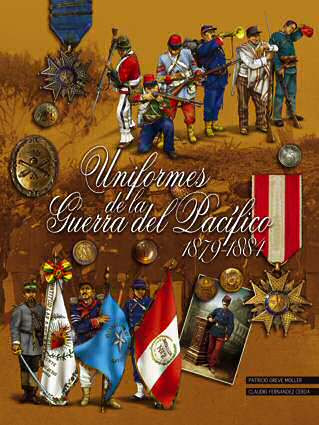 This book covers one of the longest and bloodiest conflicts in Latin America during the 19th. Century. In 1879 the war started as a simple border dispute which drew three nations armies into armed conflict, Chile, Peru and Bolivia.

Chile with its small army of 2,440 men stood to be overwhelmed by the combine allied forces of Peru and Bolivia which numbered 10,452 men, although this war is not considered large by European standards, it was equally as bloody and left thousands of men dead and the Chilean Army the victor.

In this book you will find the military dress and uniforms worn by all the opposing forces. One is struck by the colourful uniforms worn by the regiments on all sides in this war. The fashion ranges from American Civil War, Franco-Prussian War and you even find some traces of Spanish uniform.

The plates show all ranks from senior officers down to ordinary infantrymen and troopers, even the indegenous Indians are included. Credit must go to Greve and Fernández in producing such beautiful and detailed plates and bringing this subject to life.

You will also find a wonderful collection of contemporary black and white photographs taken during this conflict which with the help of Electronic Retouching have brought them into the 21st. Century. This has been done in the most careful way by the authors following to the letter the dress regulations of the time. This technique was used by them in their first book in Spanish on this subject for the Chilean Army.

This book shows an entirely new and very colourful subject for the student of military dress and campaign history. With 80 superb colour plates, many contemporary photograps and drawings, all showing the uniforms as they were actually worn by the soldiers of the day, with a combination of regulation and improvised dress.

Others show the variety of arms which were used and came from North America and Europe, also the equipment that the soldiers carried on their long campaigns, plus flags, insignia, medals and even buttons are shown in this work.

This excellent book continues to open up the vast subject of South American military uniform and history which has been woefully neglected in the past.

Posted by Mitch Williamson at 11:23 PM