THE COURSE OF THE WAR 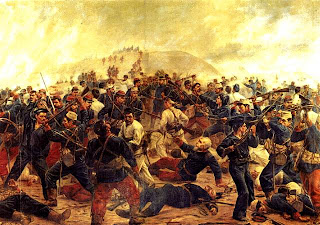 Oil Painting by Juan Lepiani which represents the battle of Arica on June 7, 1880

The War of the Pacific can be divided into six periods. The first, and shortest, began with Chile’s capture of the Bolivian seaport of Antofagasta in February 1879 and ended a few days later when Santiago had occupied the rest of the Atacama Desert. During the second stage, which lasted from April to October 1879, the Chilean and Peruvian fleets fought for control of the sea-lanes. Both sides desperately needed to dominate the waters adjacent to southern South America: if Peru’s navy triumphed, its ships could have attacked Chile’s exposed garrison in Antofagasta as well as its ports, particularly Valparaíso, the nation’s transportation and commercial nerve center. A victorious Peruvian armada could also have prevented the Moneda, the Chilean presidential palace, from importing supplies and moving troops, equipment, and pack animals north to the war zone. Peru, of course, was just as vulnerable to a seaborne attack as Chile. Santiago’s fleet hoped to stop Lima from reinforcing its garrisons in Arica and Tarapacá. It also wanted to hobble Peru’s economy by limiting its exports of nitrates and to curtail the importation of war materiel. Finally, without dominance of the sea, Chile could not invade Peru. The Chilean navy resolved the issue of naval supremacy when, in October 1879, it captured Lima’s last ironclad off Punta Angamos on Peru’s southern coast; within a month Peru’s fleet almost ceased to exist.

Building on its victory at Angamos, Chile invaded the province of Tarapacá. After landing troops at Junín and Pisagua, Santiago’s legions enlarged their beachhead by marching inland. Chile’s triumph at Dolores, or San Francisco, in November 1879 gave it virtual control of the region. A few days following their loss at Dolores, the Allies won a victory, preventing a Chilean force from capturing the city of Tarapacá. The Allied success, essentially its only military victory, did not significantly alter the course of the war: without access to supplies, the Peruvian and Bolivian troops had to evacuate the district they had fought so tenaciously to hold. The conquest of the Peruvian territory proved a godsend to Santiago: control of the nitrate mines provided Chile the means to finance its war effort. Alternately, the loss of the export tax on salitre crippled Peru’s finances and thus its ability to obtain the weapons it needed to fight the war.

A Chilean invasion and conquest of the provinces of Tacna and Arica brought them closer to their goal, Lima. This campaign, which ended in May 1880, forced Chileans to fight first at Los Angeles and then to march through a singularly inhospitable desert in order to assault the Peruvian and Bolivian troops holding the southern portion of the province. The Chileans paid a heavy price to vanquish the Allied army at the Battle of Tacna, or Campo de la Alianza, but this triumph, plus the capture of the Peruvian naval bastion of Arica, opened the way for Santiago to attack Lima. The conclusion of this, the fourth segment of the war, also marked the virtual eradication of the Allies’ regular armies: henceforth Peru would have to rely mainly on raw recruits to fight the war. Peru also lost its ally: after May 1880 Bolivia ordered its surviving troops back to the capital, where they hunkered down and waited.

Approximately six months after Arica fell, Chile launched its last and most ambitious offensive: its ships transported approximately thirty thousand men, along with their mounts and equipment, five hundred miles to the north in order to attack Lima. The Chileans, despite suffering heavy casualties, managed to capture the Peruvian capital in January 1881. Many expected, or perhaps hoped, that the seizure of Lima would have ended the struggle. But Chile’s failure to snare the remnants of the army defending the capital allowed the vanquished Peruvian troops to flee to the Andean highlands, from where they would harass the Chileans.

When no Peruvian politician would cede territory to the Chileans in return for a peace treaty, the war degenerated into a ferocious guerrilla struggle, not unlike that which beset Napoleon in Spain. The campaign to eradicate the last vestiges of Peruvian resistance became the conflict’s most difficult, most savage, and most prolonged period of fighting. Certainly the two-year battle against the irregular forces consumed Santiago’s resources and slowly sapped its determination. Fortunately for Chile, Peruvian resistance collapsed first: the newly minted Chilean government of Miguel Iglesias signed a peace treaty with Lima in October 1883. Months later the threat of a Chilean invasion forced Bolivia to accept an armistice and end the war.

Posted by Mitch Williamson at 5:59 PM