THE NATURE OF THE WAR 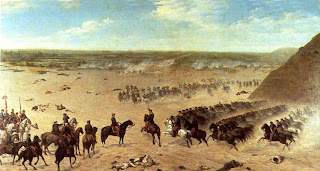 Chilean charge during the Battle of San Juan

Superficially, the War of the Pacific resembled the American Civil War and the Franco-Prussian conflict. The competing armies used modern muzzle-loaders, or breech-loading rifles, Krupp steel field and mountain artillery, and Gatling guns; their fleets’ ironclads contested the control of the sea. Indeed, the world’s second encounter between armored ships occurred off Point Angamos in October 1879. Later, the navies manufactured and deployed a variety of torpedoes and naval mines, as well as the newly created torpedo boat. The belligerents also relied upon the telegraph and railroads to communicate and to transport their troops, while their medics tended to the sick and the wounded.

While perhaps puny when compared to the size of the armies involved in U.S. or western European conflicts, the War of the Pacific proportionately consumed a relatively large number of the three belligerents’ male populations. By early 1881 the Moneda’s army had under arms about forty-two thousand men, who, in conjunction with two to three thousand sailors and marines, constituted about 2 percent of Chile’s male inhabitants. Calculating how many Peruvian and Bolivian men served in the war is more difficult, in part because these nations did not know precisely how many of their citizens resided in isolated settlements in the Andes. Still, we calculate that Bolivia sent an army of at least eight thousand troops west to drive the Chileans from Tarapacá. Later La Paz raised other units containing at least another two thousand men. Thus, more than 1 percent of Bolivia’s male population served in its army. Peru’s Army of the South, which numbered approximately nine thousand, when taken in conjunction with the twenty-one thousand troops defending Lima, represented more than 2 percent of its population. This figure, moreover, does not include the soldiers garrisoning positions in the north of Peru. In short, these wars significantly impacted on the male inhabitants of both sides. As we shall see, women also participated in the war.

Although historians from each of the three nations have described these armies as the products of leveés en masse, in fact, they were not. At the war’s onset, the patriotic or naive immediately volunteered for military service, but once the martial fever broke, the respective governments reverted to the traditional practice of press-ganging the unwary, the unimportant, and the unlucky. Traditionally the press-gangs harvested first the criminals, the idlers, and the beggars. And after they had exhausted this source, the recruiters focused on the Indians of Peru and Bolivia as well as the three nations’ rural and urban working class and their artisans; the gente decente (those with money) appeared exempt from the draft.

Since most of the Allied officers gained their military experience not in waging foreign wars but in trying to protect or upend an existing government, few had learned anything resembling formal military tactics. Nor had most of Chile’s regular officers, many of whom had graduated from its Escuela Militar, studied the recent wars in the United States or western Europe. Ironically, while the constant fighting against the Araucanian Indians provided Chilean officers with military experience, these encounters did not prepare them to fight a set-piece war. Thus, like their enemies, Chilean commanders would continue to use the tactics of the Napoleonic period—attacks in massed columns—in preference to the open formations employed during the final years of the U.S. Civil War or Prussia’s tactics of maneuver.

If the opposing armies were unaware of or unwilling to adopt the most recent wars’ tactical lessons, they did incorporate some of their technology. Chile and Peru used the telegraph while simultaneously trying to deny their opponents access to this instrument. Railroads also played a role but not to the same degree as in North America or western Europe, in part, because neither Santiago nor Lima possessed extensive rail systems. Chile’s railroad transported men and supplies from its Central Valley to the capital and then to Valparaíso, where they embarked to sail north. Peru’s main rail line, which ran from the seaport of Callao to Lima and then to the foothills of the altiplano, would not prove as useful because it did not reach the heavily populated Andean area. Chile would also use Peruvian railroads to move men and supplies to Tarapacá, to shift troops from Tacna to Arica, and to transport men and materiel from the coast to the altiplano during the conflict’s final phase. At no time did the armies actually staff these services, which remained the purview of hired civilians.

Peru’s military, perhaps because it was fighting essentially in its own territory, did not have to create a supply corps; instead it relied on sutlers or foraging parties. Although in some cases it too depended upon foraging, Bolivia primarily used its prewar institutions, the prest, to feed the troops. But since Chile had to operate in foreign territory, the Moneda had to establish quartermaster units. These new organizations, however, relied upon civilian manpower and technical skills to function. The same was true of various ambulance companies: all three countries had to depend upon civilian physicians and charities to staff, fund, and equip their units just as they had come to rely upon civilians for transportation, communications, and sometimes provisioning.

When compared to many European conflicts, the War of the Pacific might appear a backwater, but it nonetheless advances our knowledge of the history of warfare. Chile became one of the few nations to launch amphibious operations, not merely invading Peruvian territory, but using its fleet to engage in naval warfare as well as secure its supply lines. The struggle to win naval supremacy provided some lessons for maritime strategists: although the Peruvian fleet used its submerged rams, it quickly became evident that, in the age of heavy naval guns, these had a very limited future. Similarly, the deployment of naval mines and the spar as well as Lay torpedoes revealed that these weapons needed fine-tuning. (Ironically, in an 1891 civil war the Chilean navy would be the first to use the Whitehead torpedo to sink a capital ship.) The battle between the Peruvian ironclad Huáscar and the Chilean Almirante Cochrane and Almirante Blanco Encalada provided naval engineers an opportunity to study the effect of heavy guns on armored warships.

The armies that fought the War of the Pacific appear to have employed the most modern weapons but in the service of traditional tactics. With rare exceptions, none of the participants’ formations or tactics differed dramatically from those used in earlier wars. True, the adversaries utilized the railroad and the telegraph when these existed, but since none of the combatants had an extensive transportation network, the impact of the railroad was limited, though the telegraph system, because of the area it covered, proved more useful. Nor did the competing armies immediately realize that war had become so complex that they needed a general staff to direct the combat arms as well as the technical services. In fact, none of the armies contained functioning general staffs at the onset of the war. And when the various armies finally created these units, few if any of those officers serving in them had attended anything remotely resembling a staff college. In short, the armies may have acquired modern weaponry but not the knowledge that would have allowed them to use these armaments more fluently. These had to be improvised.

Imports and domestic arms industries allowed Chile, Peru, and Bolivia to provide their armies with weapons and ammunition. None of the belligerents possessed organizations capable of providing the armed forces technical services. Since they lacked the organic organizations to supply logistical support, they privatized the war effort: they rented telegraph lines and railroads and transport, and they appealed to the public for financial and technical support as if supporting the military were a volunteer hospital or public charity. Fortunately for these nations, their civilian populations provided not just leadership and technical expertise in the areas of supply, transportation, medicine, and communication but even nursed the wounded and sometimes buried those who succumbed to their wounds.

As we shall see, the warring sides committed various errors in the War of the Pacific, largely as a consequence of failing to assimilate the lessons that the wars of the United States, Europe, and Russia offered. These failures, however, do not prove that the Latin American armed forces were innately incompetent. The armies of Europe, even when battling supposedly inferior foes in Africa and Asia, also ignored or failed to assimilate these same lessons. Even after Britain’s war with the Boers had demonstrated the folly of massed attacks, Brig. Gen. Launcelot Kiggell still argued, “Victory is now won actually by the bayonet, or by the fear of it.” The French army, which in 1870 learned firsthand not to launch massed assaults, would also have to relearn the painful lesson, at great cost, during the First World War.

The South American countries, at least, had an excuse for not assimilating the most modern military theory: since these nations were at different stages in the process of modernization than their European or North American counterparts, they lacked the intellectual training and infrastructure of the more modern societies. More significantly, neither Peru nor Bolivia were nations in the traditional sense: as the Bolivian Roberto Querejazu observed, the two countries’ size and the separation of their populations by economic activity, by cultural differences, and by geographic barriers fomented regionalism while undermining the concept of a nation-state. Eventually, all the combatants, not just the Peruvian and Bolivian governments, recognized they had to restructure their institutions, including their armed forces. But they would never have realized this pressing need until the guns of the War of the Pacific had fallen silent.

Posted by Mitch Williamson at 6:00 PM