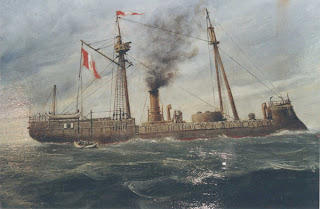 On 20 May 1877, the Whitehead Torpedo made its combat debut, when HMS Shah fired a single Whitehead at the rebel Peruvian ironclad Huascar. The Shah initially attempted to disable Huascar with a well-aimed broadside, but found her armor impenetrable. With no other options, the Shah’s captain decided to employ this new, unproven weapon as the only option remaining to defeat his foe. The torpedo missed, but its use in combat marked a turning point in naval strategy. Just as in the case of the clash between Monitor and Virginia off Hampton Roads, armor once again proved superior to naval guns. This time, however, the automobile torpedo offered another option and, if successful, technological supremacy to those who possessed it.

The Peruvian ironclad Huascar, designed by Captain Coles, built in Great Britain, and mounting two 12-ton, 10- inch rifles in a single turret. By 1877, Huascar had fallen into Peruvian rebel hands and began to bombard coastal towns and interfere with British shipping. The large unarmored RN cruiser HMS Shah and its small, unarmored consort Amythest were ordered to halt Huascar’s depredations. Shah fired 280 rounds from its two 9-inch and 16 5-inch, 6.5-ton rifles at Huascar; one round penetrated the Peruvian ironclad’s thin hull armor and killed one crewman. The other shot embedded in Huascar’s 5.5-inch turret armor. The British cruiser also unleashed a Whitehead torpedo at Huascar that missed, but it was the first-ever firing of a motor torpedo in action. (The Shah’s busy commander also ordered two spar torpedo attacks on Huascar; the boats’ crews could not even find the fugitive Peruvian.) Huascar then missed all its shots and attempted, also unsuccessfully, to ram. With the light fading fast, the British commander ordered his two warships to cease firing. But Huascar soon after surrendered to the Peruvian government.

Hardly a glorious passage of arms, the Huascar-Shah clash, the last action by a Royal Navy warship against an armored enemy until 1914, can be seen as demonstrating the resisting power of the armor plate of the time, or as demonstrating the era’s abysmal gunnery accuracy. (In fairness, it should be noted that the two unprotected RN warships had to maneuver smartly to dodge Huascar’s shells and ram bow, as well as to avoid hitting a nearby Peruvian coastal town before which the Peruvian rebel turret ship had inconveniently drawn up.) The deficiencies of the broadside arrangement of heavy guns was also evident in this clash, as Shah’s crews sweated to manhandle heavy guns from one gun port to the other to follow Huascar’s maneuverings.

Two years later, Huascar would be involved in a far more sanguinary clash, this time with two Chilean broadside ironclads, during the War of the Pacific (1879–1883). The Chilean Blanco Encalada and Almirante Cochrane were Reed-designed box battery ironclads, armed with six British-built Armstrong 9-inch, 12-ton main guns, protected by a maximum 8 inches of wrought iron. The Peruvians, in addition to Huascar, had two former Union monitors of the Canonicus class that they wisely avoided risking against the Chilean navy’s British-built guns, which would have easily penetrated the ironclads’ laminated armor. (Ever ingenious, the Peruvians also cobbled together a 48-foot-long submersible designed by a locomotive engineer, but it simply could not maneuver quickly enough to get within torpedoing distance of the Chilean ironclads.) The Peruvian-Chilean naval clash off Iquique (21 May 1879) saw two unsuccessful ramming attempts by Huascar and three more by the Huascar’s companion, the broadside ironclad Independencia. Huascar did succeed in ramming the halted unarmored Chilean corvette Esmeralda, sending it to the bottom.

Independencia, pursuing the unarmored Chilean corvette Covadonga, repeatedly trying to ram, lost control when its helmsman was killed by a Chilean sharpshooter, causing the Peruvian ironclad to ground on a reef and heel over almost on its beam ends. The pursued became the pursuer, as Covadonga came up under Independencia and pounded its vulnerable stern. Independencia ran up the white flag. Covadonga then fled as Huascar came upon the scene. Nonetheless, the Chilean warship had the distinction of being the only unarmored warship ever to force the surrender of an ironclad.

Belligerent Huascar then raided up and down the Chilean coast and encountered a Chilean squadron off Point Angamos on 8 October 1879, composed of the Reed-designed broadside ironclads Blanco Encalada and Almirante Cochrane, purchased from Great Britain, plus four unarmored warships. Outgunned, Huascar again tried to ram, but the twin screws of its opposing ironclads easily outmaneuvered the obsolete single-screw turret ship. Chilean shot penetrated the Peruvian ironclad’s stack, and its upperworks were riddled. One shot penetrated the turret, killing everyone inside. Huascar’s commander was killed, as were the four officers who succeeded him. The survivors (32 of a crew of about 200) hauled down the flag and attempted to scuttle the warship, but they were thwarted by a boarding party of Chileans, pistols in hand. The two Chilean ironclads had fired 76 9-inch projectiles at a range of 500 feet in dead-calm weather, scoring 20 hits on Huascar, 13 of which penetrated armor. Huascar itself had replied with 40 shells, all of which hit Cochrane, causing little damage but killing or wounding 12 men. The hastily repaired Huascar was taken into Chilean service. In the bombardments of Arica (27 February and 11 December 1880), Huascar inconclusively exchanged fire with the Peruvian monitors Manco Capac (former USS Oneonta) and Atahualpa (former monitor USS Catawba) in the only known clashes between Ericsson- and Coles type turreted ironclads. Not surprisingly, the Chileans to this day have retained as a museum ship the fighting Huascar, which would run New Ironsides a close second as the most-firing and fired-upon ironclad of the era. (The preserved Dutch coastal turret ships Schorpioen and Buffel are near sisters of Huascar.)

Posted by Mitch Williamson at 6:22 PM