THE BATTLE OF TARAPACA, NOVEMBER 1879 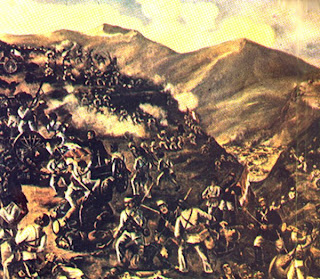 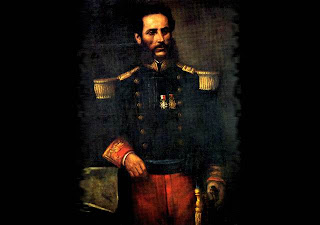 Above, a painting of Marshal Andres A. Caceres (1836-1923), Peru's greatest soldier. He fought in all of Peru's main military conflicts, from the 1859 war with Ecuador, through all of the campaigns of the war of the Pacific. He participated with great courage during the Southern campaign against the Chileans, and during Tarapaca, as a Colonel, guided his infantry troops to a decisive victory. Below, a painting depicting the fierce battle of Tarapaca, showing the Peruvians attacking the Chilean infantry and artillery at the top of the hills. At the right bottom of the painting, Caceres can be seen directing his men in combat.

The War of the Pacific developed within the heels of an international economic recession that focused attention on resources in outlying zones. In the mid-1860s, the Republics of Bolivia and Chile had come to the brink of war because of disagreements over their boundaries. Under an 1866 treaty, they divided the disputed area encompassing the Atacama Desert at 24° south latitude, located just south of the port of Antofagasta. In 1874 both countries signed a new agreement in which Chile recognized Bolivian sovereignty between parallels 24 and 25 in return for Bolivia's promise not to increase taxes on Chilean nitrate enterprises for twenty-five years. Most of the deposits of nitrate -a valuable ingredient in fertilizers and explosives- were owned and mined by Chileans and Europeans, in particular the British. Through a long-term strategy, Chile wanted not only to acquire all the nitrate fields but also to weaken Bolivia as well as Peru in order to strengthen its own strategic preeminence on the Pacific Coast. The chance arrived when the Government of Bolivia raised taxes on the export of nitrates from the region. The Chilean entrepreneurs and mine-owners resisted the new taxes and the Chilean Government decided to attack Bolivia.

Bolivia, a big but very weak country, had a minor role in the regional balance of power and was not able to solidify its sovereignty over Atacama, which left the rising power of Chile to assert its designs over the rich territory. The armed conflict began when Chilean troops occupied the port of Antofagasta in February 14th 1879. On March 1st of that year, war between both countries was officially declared. Bolivia's troops in the coast were easily defeated, in part because of their leader's incompetence and the country lack of military strength. The fact that the Bolivians did not have one single warship and their troops were poorly armed made it easy for their enemies to conquer the claimed territories in a very short period of time. On the opposite side, the Chilean army was very well prepared. French influence was perceptible in the Chilean military from the mid-nineteenth century. However, following the defeat of France in the Franco-Prussian War of 1870-71, admiration of Prussian military institutions grew and this led to a reorganization of the Chilean armed forces under the German influence.

Under this circumstances, Bolivia had no other option but to request help. So the government of La Paz invoked the Mutual Defensive Treaty signed with Peru in 1873. Peru was forced, then, to enter a war for which it was also woefully unprepared. Peru was in fact a stronger country than Bolivia and had a better organized Army and Navy, but could not match the Chilean military might. Unfortunately, Peru's military preparedness had not keep pace with its increasing economic prosperity in the 1870s. President Manuel Pardo reduced military expenditures sharply as part of his Civilista Party's policy of trying to downgrade the historically dominant role of the armed forces. His elected successor, General Mariano Ignacio Prado (1876-79), found his military options limited indeed when he attempted to deal with the growing problem of Chilean investment and ownership of the nitrate workings in Peru's arid, southernmost province of Tarapacá and, at the same time, with Chilean military threats against Bolivia to protect its equally significant nitrate investments in Bolivia's coastal province of Antofagasta.

Despite its discouraging military options, Peru felt obliged to honor its secret treaty obligations and after a brief attempt to intercede for a peaceful solution between Chileans and Bolivians, war was declared upon the Peruvians.

At the beginning of the war, the reduced Peruvian army only had 5,500 men. The infantry consisted of eight battalions with an approximate of 450 officers and soldiers each. Those battalions were the Pichincha, Zepita, Ayacucho, Callao, Cusco, Puno, Cazadores and Lima. The cavalry was even scarcer, with about 1,350 horsemen divided in three regiments: The legendary Hussars of Junin, the Guias and the Lanceros de Torata. The artillery was composed by the regiments "Dos de Mayo" and "Artilleria de Campaña", with about a thousand troops and only thirty guns. Recurring to the reserves, by July 1879 the Peruvians were able to conform a small force of 12,000 men that was disseminated among the vast coast of Tacna and Tarapaca.

The barren deserts, without water, roads, or centers of population, made it necessary that the belligerent countries struggle for control of the sea. The first six months of the war, between April and October of 1879, the Peruvians were able to stop the Chileans thanks to an extraordinary and heroic maritime campaign led by Admiral Miguel Grau, in which its smaller navy was capable to keep at bay the powerful Chilean fleet. After the battle of Angamos, however (see the naval chapter), the Chileans were able to control the sea and ready to start the terrestrial phase of the war, whose immediate objective consisted in capturing the Peruvian province of Tarapacá, rich in minerals and nitrate deposits.

In strategic terms and material resources, the Chilean expeditionary army, under orders of General Erasmo Escala, proved superior to the allied forces. On November 2nd of 1879, despite a strong resistance, 10,000 Chilean soldiers supported by part of their squadron, -six warships and ten steamers- were able to disembark in the port of Pisagua establishing their first beach head in Peruvian territory. The Chilean Army moved inland and took possession of the railroad Pisagua-Agua Santa. Next, they proceeded towards the North, assuring a line of provisions with the valuable support of their fleet. During this process the Chileans captured the town of Dolores. On November 19th, the allies faced the Chilean expeditionary forces in the heights of the hill of San Francisco. The battle, fought in a front of three kilometers of extension, was favorable to the Chileans and on the 23rd of that month, the invaders occupied the important port of Iquique.

The decimated Peruvian forces, under orders of General Juan Buendía, moved towards the port of Arica, but on their way they stop in the city of Tarapacá. The Chilean high command, aware of the difficult situation of the Peruvians, and after being informed about their exact position, decided to send an expedition composed of six infantry battalions, two batteries -one consisting of Krupps and the other of Armstrong guns-, and a 150 cavalry squadron, a total of 3,900 selected men, with the purpose of annihilating them.

On early November 27th, 1879, the Chilean forces reached their objective and took position in the hills located west of Tarapacá. Colonel Andres A. Caceres, Commander of the Peruvian Second Division, was informed about the unexpected presence of the enemy, and without hesitation ordered his men to move out of the town and to charge against the Chileans up on the hills.

Caceres immediately divided his troops in three columns. The First and Second Company of his legendary regiment, the Zepita, consisting of 639 officers and men, was placed on the right, under orders of Commander Zubiaga. The Fifth and Sixth Company, under Mayor Pardo Figueroa was placed on the center and the Third and Fourth Company, under Mayor Arguedas, attacked from the left flank. At the same time Caceres sent a message to Colonel Manuel Suarez, Commander of the Dos the Mayo regiment, requesting him to attack and move his troops also to the left.

The Zepita started its fiercely assault against the Chilean positions, and the rest of the Peruvian regiments, under orders of Colonels Bolognesi, Rios and Castañon moved also against the enemy. The Zepita climbed the west side of the hills under heavy fire from the Chilean guns and infantry. The fire was very intense, but the Peruvians, in guerrilla displacements, keep escalating. The Column under Commander Zubiaga was the first to reach its objective and after a bayonet charge and against all odds, captured four enemy guns. Meanwhile the Columns under Mayor Pardo Figueroa and Arguedas caused severe damage upon the Chilean infantry. After the fierce charge, the Chileans lost complete control and were forced to withdraw in complete disorder to a position located 3 miles down the hills. The Peruvians had achieved a partial victory, but had lost several officers and men, including Commanders Zubiaga and Pardo Figueroa, Colonel Manuel Suarez, head of the Dos de Mayo battalion and Colonel Caceres' brother, Juan.

Andres Caceres was also wounded but decided to continue the fight against the new Chilean positions under Colonel Arteaga. His division was reinforced with the arrival of the Iquique battalion and the Loa and Naval Columns, as well as one Company from the Ayacucho battalion and one from the Gendarmes battalion. Those forces were part of the two Peruvian Divisions, strong of 1,300 men, that were located 20 miles from Tarapaca when the battle erupted.

With this reinforcements Caceres made a new assault Southeast of Tarapaca reaching and disbanding the enemy in five occasions. The Chileans however regrouped, but Caceres flanked them from the left side forcing them to move towards the South. In a desesperate last attempt a detachment of Chilean grenadiers made an effort to counter-attack, but were stopped by the gallant men of the Loa and Naval Columns. Caceres then made a last fierce attack against the center of the Chilean army destroying it completely. The survivors left their last pieces of artillery, ammunitions and rifles and run for their lives in complete disorder.

The Peruvians had achieved, after nine hours of intense combat, a total victory. The once proud Chilean column had a total of 800 casualties and 67 prisoners of war and lost all of its guns and most of its armament. The Peruvians however, having no cavalry, were not able to follow the survivors beyond the Minta hill, which impede the consolidation of the victory. The triumph boost the morale of the troops, but at the end did not changed the results of the war.

After Tarapaca the Peruvians moved towards the Southern port of Arica. Coincidentally The next objective for the Chileans was to capture such position. Twenty transports were concentrated in Pisagua and on February 24th, 1880 they appeared off Pacocha, a small town located few hundred miles North of Arica where the Army of 12,000 men landed. At the head of the Chilean forces rode a new commander, General Manuel Baquedano, who pushed his Army into the desert, attacked and dislodged the Peruvians entrenched at Los Angeles hills, and then defeated the combined Peruvian and Bolivian Armies at Tacna.

The Chilean squadron in the meantime, kept steady pressure on Arica from the sea. On February 27,1880, two Chilean warships entered the bay and fired on a troop train that was ready to leave. From "the morro" a huge rising bluff that protected Arica, Peruvian artillery opened fire on them. The Chilean ships retreated from the line of fire. Despite this, they kept up a tight blockade .

After the defeat at Tacna, the Bolivians abandoned the fight and did not actively participate in the war. On June 6th the Chileans launched a combined sea and land attack against Arica. Peruvian artillery silenced the Chilean field guns and opened a devastating fire on the ships within range. The next morning a Chilean infantry column was ready to assault the fortress.

Posted by Mitch Williamson at 6:22 PM