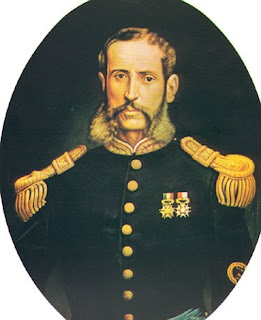 Above, a painting of Great Marshal Andres A. Caceres, who as a Colonel and next as a General lead Peruvian regulars and guerrillas against the Chilean army during the Breña Campaign in the remote Peruvian Andes. This indomitable officer never surrender and become the symbol of Peru´s resistance against the invader. Below, a group of Peruvian officers of the Breña Campaign, probably taken in 1883. General Caceres can be seen in civilian clothes, first row, sixth from right to left. The photography also can give us an idea of the French influence in the designs used in the Peruvian military uniforms during those days.

The capitulation of Lima on January 1881, after the bloody battles of San Juan and Miraflores didn't put an end to the Peruvian-Chilean war, because although the remainders of the organized Peruvian army were destroyed, there were still officers willing to continue the fight. Soon the circumstances would change the situation of the conflict and the Peruvians, from fighting an expeditionary army, would pass to fight against an occupation force; the conventional tactics would open the way to the war of guerrillas, and the warlike scenario would pass from the arid Pacific coasts to the cold and inhospitable Andes.

Leader of the new resistance movement was Colonel Andrés Caceres, victor of the battle of Tarapacá, veteran of the whole campaign of the South and one of the officers that had a more outstanding performance during the defense of the capital.

After recovering from the wounds suffered during the epic battle of Miraflores, time during which he remained hidden in some place of Lima, in April of 1881 Colonel Cáceres moved to Jauja, city of the Peruvian central mountains, from where he dedicated his efforts to create a new army in order to expel the invaders from the country.

The first column of the new military force was formed by policemen from the town of Tarma. Caceres patience began to give his fruits thanks to the help from other officers of the decimated army and many citizens willing to continue the fight under the most adverse circumstances.

The first strategic maneuver conceived by Cáceres during what would be known as “The Breña Campaign”, during the phase that would occupy the period between June 1881 and June 1882, was to undertake a war of guerrillas, which would provide him the necessary time to form and to train an organized military force. The idea was to attract the Chileans, still in the coastal region, to the central mountains, using irregular forces with the objective of disorganizing them, by means of a mobile defense. Within this context, Caceres had planned to combine the resistance with the counter-attack. Product of this tactics would be the continuous incursions of the Peruvian forces in the towns of Matucana, the Oroya, Tarma, Jauja, Chicla, San Mateo and others. Caceres would adopt such a defensive outline strategy until reaching the capacity to go into a vigorous counter-offensive.

In a few months, Caceres, already promoted to General and Head of the central region of Peru by Supreme Director Nicolas de Pierola, had armed a respectable and disciplined force. By the end of 1881 his army was composed of 3,000 men, eight artillery pieces and a complete cavalry regiment, and start attacking the Chileans from Chosica, 50 kilometers east of Lima. Also, General Cáceres achieved the valuable support from the peasants of diverse Andean communities that were incorporated as guerilla fighters under orders to harass the enemy and to provide the necessary support for the operations of the regular army.

The Chilean military, which already had consolidated the occupation of the main cities of Peru -with exception of Arequipa -, understood that the presence of this hostile force would hinder the possibility to reach a quick peace with the new government presided by lawyer Francisco García Calderón. For this reason, the Chilean Military Governor of Lima, Rear Admiral Patrick Lynch, concluded that while the army of Caceres was not destroyed, the conflict would be prolonged indefinitely. In May of 1881, Lynch decided to send a punitive expedition heading for Junin and Cerro de Pasco under Colonel Ambrosio Letelier with orders to cease any resistance attempts on part of the Peruvians.

The expedition however was not only a failure, but rather it originated a scandal because of corruption cases and abuse of authority blamed on Letelier. To protect the retreat of his besieged troops from Cerro de Pasco, Letelier ordered a battalion of the regiment Buin to move from Casapalca until the village of Caves. His force continued up to the hacienda of Sangrar, where it was attacked by a Peruvian battalion that caused several casualties to the opponent and the loss of fifty rifles.

Lynch suspended this kind of small expeditions and alarmed by the situation he ordered the creation of the “Central Division” strong of about 3,000 men under command of capable officers eager to fulfill the mission of conquering the Andean region. On January 1882, such army, divided in two columns began the advance toward the interior Andean region of Peru.

Soon the confrontations between both parties arose. In Huarochiri, the force of Caceres suffered a setback due to the treacherous desertion in combat of the battalions commanded by Colonel Manuel Vento and some cavalry troops. The energy of Caceres impeded what could have become a Peruvian debacle. In spite of suffering big losses, the Pervian army retreated in complete order into Tarma, being reduced to 1,000 infantry men, 98 horsemen and 90 gunners, although it was far from collapsing as a combative unit.

On February the 1st, 1882, the Chilean column was placed under orders of Colonel Estanislao del Canto, a very capable officer head of the regiment “Segundo de Linea”. Soon however he will find his task was not easy. On February five, del Canto´s troops sustained a combat with the army of Caceres in Pucara. The Chileans, after suffering many casualties, were forced to retreat toward Zapallanga, leaving big quantites of armament and ammunition. After that encounter Cáceres advanced toward the city of Ayacucho, where a terrible tempest in the narrow passes located between the snow peaks of Acobamba and Julcamarca caused the death of 412 of his men and the lost of all the mule packs.

After arriving to Ayacucho, at the end of February, the unbroken officer hardly had 500 soldiers remaining. He assimilated however the garrison that protected this department and in the following three months he proceeded with great energy to reorganize the army, conforming four battalions of 250 men each one -among them the legendary Zepita - 150 gunners and 50 cavalry men. With such a force, by the end of June of 1882, Cáceres undertook the second phase of the campaign whose objective was to expel or if possible to destroy the Central Division that now had penetrated in the Mantaro valley.

Several of the regiments of the Chilean Division that occupied the central mountain of Peru were disseminated in a radius of 300 kilometers among the Andean towns of Chicla, Marcavalle and Cerro de Pasco, this last city located at more than four thousand meters above sea level. The prosperous city of Huancayo, capital of the department of Junín, located beside the river Mantaro and with an altitude of 3,340 meters, was chosen by Colonel del Canto as his headquarters because of its central location healthy climate and warm temperature.

Outside of Huancayo and separate each one by a distance of 20 or 30 kilometers, other small Chilean detachments were distributed among the region towns. In such situation the Chileans were constantly harassed by the guerillas, who constantly attack them and capture equipment convoys. Also, a good percentage of Chilean soldiers had fallen victims of illnesses like typhus and they lay defenseless in hospitals or improvised campaign stores.

The division of the Chilean troops in a hostile land was proving to be a strategic mistake that could bring serious consequences. Considering this difficult situation, which worsened by the incursions of the Caceres army, Governor Lynch ordered Colonel del Canto to evacuate Huancayo, withdraw his troops to Jauja and retain the railroad of the Oroya or another strategic point. It was necessary for the Chileans to shorten their lines and refolding their troops toward places where they could offer a solid resistance and to lend due medical attendance to the sick persons. The offensive could be renewed at the end of the cold Andean winter.

In such a situation, general Caceres saw the moment to undertake the main campaign against the invader. The distribution of the Chilean forces, suggested to the Peruvian General the idea of encasing Colonel del Canto in the valley of the Mantaro, by means of a double rodeo movement, cutting his retreat toward Lima, to beat it later on in parts. For such an effect Cáceres divided his forces, consistent in 1300 soldiers and 3000 guerillas fighters, in three columns. The first of them, integrated by the battalion Pucará number 4, the guerilla columns of Comas and Libres de Ayacucho and fractions of the battalion America, was placed under Colonel's Juan Gasto, The second column, composed by a battalion of regulars and a group of guerrillas, was placed under Colonel Maximo Tafur and, The third column, with the rest of the army, remained under command of the own Cáceres.

On July 8th, 1882, General Caceres Column arrived in the town of Chongos and then crossed the towns of Pasos, Ascotambo, Acoria and others without being detected by the enemy. Finally, he placed his troops at the heights of Tayacaja, facing the town of Marcavalle, which was the first military objective of his expedition. From their position, the Peruvians could see very clearly the Chilean troops of the Santiago regiment. At dawn of June 9th, Caceres started a simultaneous attack with artillery and infantry. The surprise among the Chileans was such, that in no more than 30 minutes the enemy was expelled from Marcavalle and had to withdraw toward the town of Pucara, one mile away, on the way to Huancayo. During that fight the Chileans lost 34 men. In Pucara, a new battle developed, between three Companies of the Santiago regiment and four Companies of the Peruvian regiments Tarapaca, Junin, and a Column of guerrillas. The Peruvian attack was so intense, that the Chilean army was forced to make a new retreat. In total, the Chileans had 200 casualties, between dead and injured. They also abandoned considerable quantities of ammunition and war material. Among the Chilean fatal casualties were six officers, for whom Caceres provided special funeral honors in recognition of their gallant behavior and heroism in combat.

At the same time, the Column of Colonel Gasto attacked the Chilean garrison in Concepcion, and after a fierce fight that lasted about 16 hours, all the 77 Chilean officers and men of the Chacabuco regiment were killed in combat after a gallant resistance and their decision not to surrender.

On July 10th, the victorious forces of General Caceres moved toward Junin´s capital of Huancayo to attack Colonel del Canto´s main force, but once there, they found that the Chileans had withdrew toward Jauja. The important city was recovered by the Peruvians. The objective was partially achieved.

The serious defeats, convinced the Chilean command to force their army´s retreat from the central Andean region, which they achieved after crossing the Oroya bridge, which Colonel Tafur was not able to destroy. After this, General Caceres forces gained total control of the whole Mantaro valley . Caceres then established his general headquarters in the strategic town of Tarma and proceed to reorganize his army.

The war was coming to an end, but the Andean campaign, was still to continue with extraordinary heroism.

Posted by Mitch Williamson at 6:28 PM