THE EPIC CHARGE OF THE PERUVIAN MARITIME BRIGADE 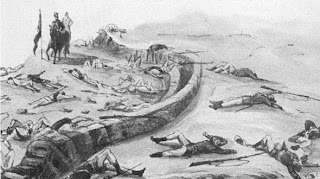 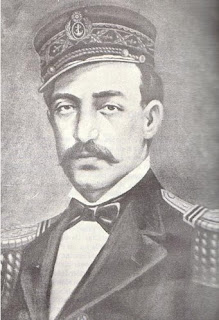 Born in 1824 from a wealthy American businessman and a distinguished Peruvian lady, Captain Juan Fanning was a man of courage and honor who served in the Navy since he was 15 years old. Fanning learn from his father what patriotism was, for as his mentor gave up all his fortune for the American War of Independence, he too, gave his up his wealth and his life in defense of his country. Commander Fanning lead one of the most spectacular infantry charges in the War of the Pacific, in which 400 of his 600 men from the Guarnición de Marina, died. Below, a canvass by European artist Rudolph de Lisle, depicting the aftermath of the Miraflores Battle.

The Peruvian port of Callao, West of Lima, is well known for several reasons, among them, for being, as many other ports in the world, a land of hard working, sometimes rough and tough men. And those men are, without a doubt, perfect raw material for good soldiers, military diamonds that, properly polished, can become perfect jewels in times of war.

It was January 10th, 1880, and the war with Chile was fought in the South of the country by the army. The armed forces were small in number and more men were needed to fight. That day, President Nicolas de Pierola established, through a decree, a naval brigade whose main objective was to “provide the ships of the navy with able and talented men in the use of artillery and for actions of disembark”. Nine days later the Supreme Director asked Navy Commander Juan Fanning to organize the brigade among the sailors of Callao. It was called "Guarnicion de Marina".

Fanning was the perfect choice for this task and indeed he did a very good job. The son of American businessman John Fanning, who contributed with his fortune to the U.S. war of independence, the young Juan, born in Lambayeque in 1824, joined the Peruvian Navy in 1844, receiving his first commission as junior officer of the warship Libertad. He fought as Corvette Captain during the 1866 war with Spain, and from April to September 1879 was posted in Arica, preparing the batteries that defended the port's garrison.

During those days Peru had not organized its Marine Corps like the British or the Americans did, and the creation of the naval brigade may be, at one point, considered as the nearest effort. The "Guarnicion de Marina" was composed exclusively, by citizens of Callao –known as “Chalacos”- mainly sailors that protected the Peruvian ships and boats during the siege of Callao. Combat was nothing new for these men, for they participated in several nocturnal fights against Chilean torpedo boats, becoming, in a short but intense period of time, experienced veterans.

The brigade was organized in six companies. The basis was an old infantry column called “Constitucion”. It had a total of 524 men, from which 37 were officers. Their armament consisted in Chassepot rifles (1).

After their successful maritime and land campaigns the Chileans decided to capture Lima with the purpose of forcing the end of the war by means of a capitulation that will include the cession to Chile of Peru's Southern provinces.

The city of Lima was founded by Spanish conqueror Francisco Pizarro in 1541, between the bank of the Rimac River and the Pacific Ocean. It was called the City of Kings in honor of the king and queen of Spain and because it was the capital of the Nueva Castilla government. During the republic, the city, the "Three times crowned villa", known also as the "Pearl of the Pacific", kept her beauty and importance as Peru's cultural and economic center.

In November of 1880, Chile disembarked in the beaches of Curayacu, at Lurin, South of Lima, an expeditionary force composed of nearly 30,000 men and one and a half month later it undertook the march on the Peruvian capital. The regular Peruvian army no longer existed and the remains of the "First Army of the South" were reinforced with units of volunteers coming from diverse parts of the country. This way, the Peruvians congregated a contingent of almost 18,000 men to defend their capital (2).

More than half the men were civilians with just a basic training. Most of the officers had brevet military rank. Many soldiers were peasants from the Andean regions. The rest of the ranks were composed of professionals such as lawyers, doctors, engineers, as well as traders and businessmen. Students from the universities, blue-collar workers and artisans also joined the army in order to defend their sacred soil from the invaders.

On early January 15th, 1881, after the disastrous Battle of San Juan, the reserve battalions "Guarnicion de Marina", "Guardia Chalaca" and "Celadores del Callao", moved from the port into Miraflores, and were placed in the positions between the reducts number two and three, which protected Lima from the invasion. The Commander of that sector was army Colonel Andres Caceres, probably the best Peruvian soldier of his time.

That afternoon, the Chilean army attacked, and the so-called Battle of Miraflores started. The Chilean Division under Colonel Pedro Lagos was ordered to occupy the Peruvian positions at the reducts. The Aconcagua regiment, part of the Lagos force, fiercely charged against their objective. After one hour of fierce fighting, Colonel Caceres, who was very much aware that the best defense was to attack, ordered a counter-offensive, and the gallant Fanning marched with his brave men to contain the Chilean assault (3).

At three o'clock, Fanning, mounted on his white horse and sword in hand ordered the Chalacos to fix bayonets and charge. His mariners advanced against the enemy with great determination and courage. The attack was such that the Chilean battalions Aconcagua and Navales not only stopped their initial charge but also were forced to retreat. The proud Chilean officers ordered their men to remain in their positions and stand the Peruvian charge, but it was impossible. The soldiers run, hid or simply disbanded. In their desperation they abandoned four guns and put in risk the brigade Barcelo, whose right flank was almost surpassed by the Peruvians.

Famed Chilean author Benjamin Vicuña McKenna, who was a witness of the war, said that:

"It was never seen before and there are no words to describe the gallantry and determination of the Peruvians. Our enemies seemed like if they dropped from the clouds or as if they grew from the earth. Our bands played martial music and Colonel Lagos requested reinforces, which the Chilean high command start to send to him with desperation".

In vain the Chilean officers ordered the troops to regroup. They simply did not obey. Gradually however the chaos ceased with the arrival of reinforcements from the regiments Valparaiso, Caupolican and Santiago. Once reorganized, the Chileans executed another assault and the Guardia Chalaca again was sent to contain them.

Fanning shouted to his men:

Go on! Go on! Guarnicion de Marina, go on!

And so, the brave naval officer and his Chalacos charged like demons with the bayonet.

The battle reached its peak. At about 17: 00 the novel Peruvian defenses started to withdraw, but not the Chalacos, who kept fighting until the shadows of the night, without receiving any support. And when there was no more ammunition left the knife and the bayonet remained as the only Peruvian weapons of the bloody fight.

And as the number of the Chileans increased the brave Chalacos, without other troops to back them began to fall, one by one, not giving, not asking for quarter. They remained there, in the field, fighting to the end, giving their last drop of blood, knowing that their fate was sealed.

From the 524 men of the "Guarnicion de Marina", 400 of them died in combat. From its thirty-seven officers, twenty-three of them perished in action, among them Captain Manuel Pino Diaz, Lieutenant Guillermo Higginson and the Richardson brothers. One of the few officers that miraculously saved his live, though severely wounded, was the brigade’s deputy commander, Colonel Andres Suarez.

The Chileans had during the battles of San Juan and Miraflores more than 5,000 casualties, including 1,250 deaths. It is clear that the biggest percentage of those casualties was a result of the amazing charge performed by Fanning's brave marines.

The rich, fancy and valiant Captain Fanning was also mortally wounded. Agonizing, he was sent in an ambulance to his home, downtown Lima. The next day, January the 16th, the 57 old naval officer died in the arms of his wife.

His last words were, “I am dying for my country!”

(1) Fanning’s brigade would be incorporated into the First Army Corps under Colonel Caceres, which was composed of two divisions, reserve and artillery. The First Division was composed of the battalions Guardia Peruana, Cajamarca and 9 de Diciembre. The Second Division had the battalions Junin, Jauja, Lima, Canta, 28 de Julio, Piura, Zepita, Arica, Manco Capac, Ayacucho, Libres de Cajamarca and Columna de Guias. The reserve was composed of the batalion Artillería Volante, Guarnicion de Marina and Canta. The artillery had 2 Rodmans, 2 Parrots and 2 bronze guns. The Chief of Staff of the army was General Pedro Silva.

(3) In this first charge the battalion Jauja supported the Guarnicion de Marina.

Posted by Mitch Williamson at 11:12 AM